skip to main | skip to sidebar

Here is another great online offer. The Poison Diaries isn't even in stores yet, but Harper Collins has posted it in it's entirety online. Interested readers should check it out soon though as I don't know for how long it will be available.

I read this book a couple of years ago; it was really pretty cute. I haven't had the chance to read any of the others in this series, but hopefully will one of these days. Enjoy the freebie! =)
Posted by RebekahC at 1:38 PM 1 comment:
Labels: book, books online, free, harper collins, young adult

A Leap of Faith by Sabine S. Goldman 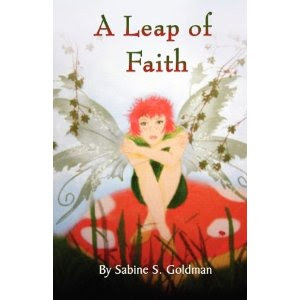 We live in a world full of endless possibilities and opportunities. Countless events take place every moment just outside our view, but just because we do not see these things happen does not make them any less real. What if just outside our realm of knowledge and understanding there was another whole world of life? What if legends and tales of days gone by were true? What if faeries, or rather Pixies, actually were to co-exist alongside our human world?

According to Sabine S. Goldman's, A Leap of Faith, such a reality is not so far fetched. Pixies do exist and take up residence in many places within our human realm. And one place in particular that they call home is Windhill Tree.

Life in the Windhill Tree should be blissful; but Faith, a fiery sixteen year old Pixie, has never felt like she fit in. Compared to the other Pixies in her home, Faith both looks and acts differently. Unlike others of her kind, her heart desires to explore, and explore she does. But when Faith's father finds out that her love of exploration has been taking her beyond her community's borders to observe the humans he is furious. Not only is interacting with humans incredibly dangerous, it's also expressly forbidden by the Pixie code.

After being found out by her father, Faith can't stand to sit around and see her punishment come to pass. She has been told that her lightening ceremony is to be canceled, but a Pixie who goes without her lighting ceremony is doomed. It is at this time only that a Pixie will gain her powers, including the ability to always fly. If she is to be denied her chance at a full Pixie life, Faith can't begin to imagine what she will do. Her interest in humans has always been hard to ignore, but certainly just watching from the sidelines can't warrant this kind of punishment.

It doesn't take long for Faith to realize the gravity of her misjudgement. Deep in thought on her favorite red mushroom with white polka dots, she never notices the humans getting closer. And before she can even realize what has happened, Faith finds herself caught up in the hand of a human girl. This particular girl, Sam, is one Faith has watched diligently over time. Something about her in particular has always drawn Faith's attention, yet now with no space between them Faith understands how serious her miscalculations might have been.

Faith's journey doesn't end here; however, I don't want to give away any more of the story or else you won't have any reason to read it for yourself. And that, my fellow bookworms, would be completely unfair to both you and the author. Sabine S. Goldman has done a fabulous job creating Faith's world and telling her story. Perfect for any young adult whether this reader has a pre-existing interest in the world Pixies and/or faeries or not.

I found the story to be quite endearing, and Faith's lone spirit is an aspect I know many young readers can relate to. Feeling outcast and alone is, sadly, an all too common complaint in today's society, but as readers will discover it does not have to be that way. You are never alone, no matter how different you are. Friends come in all shapes, sizes, colors, and from all walks of life. And if it takes a tiny Pixie to get this point across so be it!

I had one small complaint in regards to the story development, but it's hard to be too specific without giving anything important away. I guess the easiest way to explain would be to simply say that I found part of the story's progression about 9/10ths of the way through to be somewhat unbelievable. Based on information given earlier in the book it just didn't fit. The way some of the character's responded to certain events seemed all too easy, like the progression was rushed in order to draw the story to a close. I don't know. Maybe I'm way off base and reading too much in to things. I guess I'll leave that up to you, the other readers, to decide.

Despite this minor criticism, I must say it was an absolute pleasure to discover and read this little gem. Infact, my deepest thanks go out to Sabine for allowing me this review opportunity. THANK YOU!! Looking forward to seeing what twists and turns A Leap of Faith- A New Beginning, Ms. Goldman's next installment takes.

If you're looking to find reviews, previews, book tours, guest author blogs, book giveaways and more all to do with books geared towards children and young adults then you've come to the right place.

There are so many incredible books out there for kids and teens. Unfortunately there are also a lot that aren't quite so fantastic. Here at Ready Set Read Reviews I look forward to sharing my thoughts and opinions on the books my girls and I read, introducing you to new authors and books you might not already have been aware of, and also helping save you the time and energy of having to weed out those books that just won't live up to your expectations.

As a mother I find that I simply can't encourage my girls enough to read and enjoy the whole experience. And it's such a great feeling to see that love transfer to them and blossom into something wonderful. In short, it is my hope that through this blog I can share a little of that excitement with you and your children.

Thanks for stopping by!

ATTENTION AUTHORS & PUBLISHERS: If you would like to submit your digital children's or young adult's book to be reviewed and featured here, please e-mail me. While I may not always be able to accept every request, I'd love to hear from you. Thanks! readysetreadreviews (AT) gmail (DOT) com

RebekahC
Oklahoma, United States
I am 34, happily married for 16+ years to my adoring husband, mother to two wonderful daughters (9 and 11), and I love to read. What more is there to say? LOL